the round rutland run

Enter for the drive for the company now

The route starts in Uppingham Market Square and continues around Rutland, taking in some of the magnificent views and rural features this small county has to offer. We then return back to Uppingham where some entertainment is arranged for the afternoon.

Directions for the 2023 route are available as a downloadable pdf here.

They can also be accessed through the online maps by hovering the mouse over the menu icon in the top right hand corner and selecting directions. Step by step directions will then appear in a column down the left hand side of the map with the option to print.

Please note that if any major changes are made, these will be communicated to all booked entrants beforehand. Otherwise the general plan is as follows:

Arrive at The Falcon Inn at Uppingham to register and receive your certificate. High Street East and part of the Market Square will be closed off to allow parking for the classic vehicles. Refreshments, including bacon sandwiches from The Falcon, are available during the morning. Toilets are available.

You can or course, if you wish, divert to places of interest or call in for a coffee at any of the open venues on route. Continue along the rest of the route and enjoy the beauty and many rural features of the county’s towns and villages.

Arrive back at Uppingham and enjoy the seating, entertainment and meals that are available throughout the afternoon.

Before filling out an entry form please carefully read the rules and regulations which are also available as a downloadable pdf by clicking here.

When filling out the entry form you will be asked to confirm that you have read these rules and regulations and agree to be bound by them.

To enter and take part in the next Round Rutland Run please fill out our entry form and pay the appropriate fee as outlined below.

The entry fee is £12 per vehicle which can be paid via PayPal or by card by clicking on the buttons below.

You can also pay via bank transfer using the following details:

If you are having trouble paying, contact us and we can try and help. Alternatively we can arrange for payment to be taken on the day (an additional fee of £2 will apply).

Your entry number will be emailed to you in a printable format once payment has been received. If arrangements have been made to pay on the day, please do so when registering upon arrival and collect your entry number.

When registering you will also receive your certificate of participation for the event. 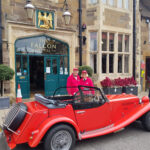 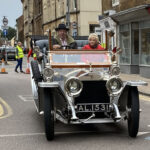 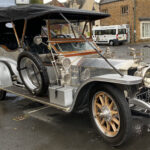 Many thanks for organising a great day, I stayed around until 5 and tried to chat to most owners who all really enjoyed the day and had incredible high praise for the organisation and the route – well done on such a successful day.

to the Stilton Run in April.

Thank you for a lovely day yesterday in Rutland. My son, Craig, and I thoroughly enjoyed the tour through beautiful and historic villages in the charming Rutland countryside and the wonderful reception that we all received in the Market Place and the Falcon Hotel.
Having participated in the Annual Stilton Cheese Run two years ago, we were already charmed by our Rutland experience then and even more so yesterday. You and your Uppingham First colleagues and voluteers have done a magnificent job in organising the event and the signposting along the route. Congratulations and gratitude to all involved.
Craig and I would most certainly wish to join in 2022 Round Rutland Run if you decide to organise one next year and also the anticipated 2022 Annual Stilton Cheese Run.

Thank you for a great day yesterday really enjoyed it, putting the turn left, right signs about the course was a great idea and looking forward to next year’s Stilton cheese  run and the RRR at the end of next year.

My heartiest thanks to you and your team for organising a terrific inaugural Round Rutland Run yesterday. Despite the odd shower of rain it was hugely enjoyable and a wonderful opportunity to exercise our cherished cars with so many like minds, based at a perfect venue, an interesting, scenic route  and with flawless organisation (trying to organise classic car owners has been likened to the herding of cats !).

Driving an open car dictated a non-stop run so we did not have a chance to stop off at Lyddington and Whitwell. However, I think that was a really good idea and hopefully you will be able to programme stop-overs next year when I am quite sure the weather will be more seasonal.

Again many thanks to you and your team.

Thank you and your team of volunteers for organising and running the event on Sunday. Cracking day out!

As the weather was non-co-operative, we chose to abort the run at Oakham, heading back to base the most direct route. We have a kit car which does not have a roof made for the heavy rain we experienced. We did complete the run having done the bit from Oakham to Uppingham on the way down.  I have seen some pictures on Facebook from the afternoon and it seems the weather was much better, perhaps the lesson is not to give up too early.

I think this should be an event run every year in September as one of the last run out’s of the season, we SORN our cars through the winter, and a season opener, the Stilton Run, in April.

The only problem we experienced was grounding out on some of the very rough roads, our cars run very low ground clearance due to the design and the “Hump” in the middle of single-track roads is sometimes a bit of an issue. Having said that it was only in a couple of places and we have sump guards to stop any major damage. Most of the roads I had not driven before so it was a great experience, thank you.

It was a credit to everyone involved and a lot of work went in to it with a very well thought out route.

Peter and I really enjoyed yesterday and want to thank all those involved for the work they put in. Everything ran smoothly and we found it enjoyable. We would like to commend the marshals who directed us in etc. They were so friendly and welcoming with seemingly having time for every entrant. One small suggestion for another year,  is that the coffee stop needs to be further on in the ride, we felt we had only just got going! We thoroughly enjoyed the day and meeting up with like minded folk, so please carry on with planning for next year which we hope to attend.

What a fantastic day.  The route was well organised and instructions were clear. We had a lovely day.  Thank you to all concerned for your dedication and hard work.  Looking forward to the next one.

Many thanks the hard work and good organisation for the excellent run and event yesterday. See you next time

A quick thank you to you and everyone else involved with the event, a really good day, great scenery, lots of interesting cars to admire and interesting people to chat to. Sorry I didn’t get to thank you in person.

Looking forward to the Cheese Run

If you have any questions, would like to check availability or run into any problems with your payment please contact using the following details:

This is off canvas menu widget area. To enable it add some widgets into Appearance – Widgets – Menu Section, and go to Customizer – Main menu to set the icon position.